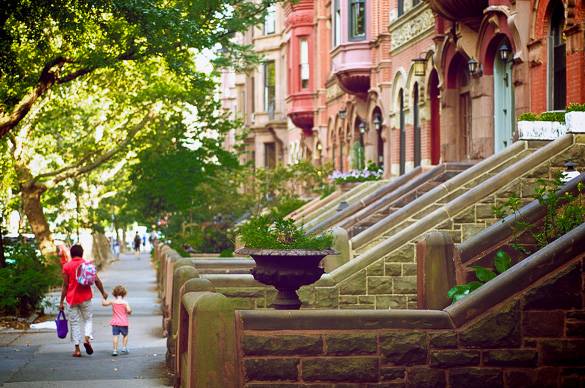 Classic brownstone houses in Brooklyn’s Park Slope
Whether you’re coming to New York City for a short holiday or you’re planning to stay a little longer, Brooklyn is a fantastic alternative to Manhattan when it comes to accommodation. Not only are the housing prices lower, but by staying in one of Brooklyn’s many neighborhoods you’ll also be able to feel like a true local in New York City instead of just a tourist. Not to mention that the neighborhoods in Brooklyn are often much greener, prettier and at least as safe as those in Manhattan. Park Slope is one Brooklyn neighborhood that combines all these great characteristics.

In this article, we’ll explore Park Slope and show you why this is a fantastic New York City neighborhood to stay in during your holiday or longer visit to the city!

Park Slope is a neighborhood in the western part of Brooklyn. Generally, the Park Slope area is considered to be bounded by Prospect Avenue in the south, 4th Avenue in the west, Flatbush Avenue in the north and Prospect Park in the east. This proximity to Brooklyn’s most famous park is one of the reasons Park Slope is considered to be one of New York City’s most desirable neighborhoods. In 2010, it was even ranked as the number 1 neighborhood in New York by New York Magazine. It’s not hard to see why, as Park Slope boasts beautiful brownstone houses, multiple great shopping streets, many cafes, bars and restaurants, good schools and great access to public transit.

The neighborhood is also close to some of Brooklyn’s best attractions, such as the Brooklyn Museum, the Brooklyn Botanic Garden and the Brooklyn Public Library.

5th Avenue and 7th Avenue are the main shopping streets of Park Slope. You’ll find many great independent stores along these avenues. On 5th Avenue you’ll find gems such as Beacon’s Closet where you can find secondhand designer clothes for a fraction of the original price, or Cog & Pearl, which is filled with handcrafted jewelry and art by Brooklyn designers. Great shops along 7th Avenue include Brooklyn Industries, where you can find all sorts of designer clothes, and Lion in the Sun for remarkable cards and stationary. Another gem is Ride Brooklyn along Bergen Street, where you can rent a bike to tour around the neighborhood. If you want to do some grocery shopping or if you’re looking for the bigger chain stores, then look up Atlantic Terminal Mall in the north of Park Slope. 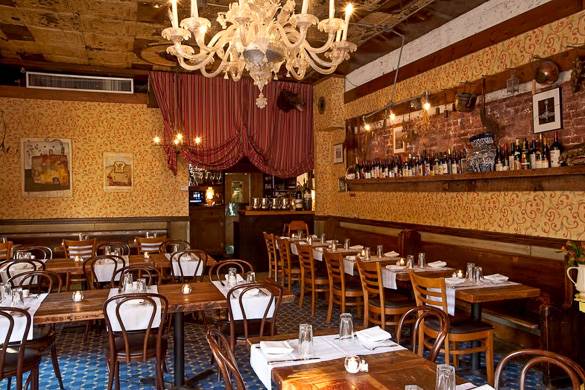 Al Di La Restaurant in Brooklyn’s Park Slope
Along 5th Avenue you’ll also find a plethora of great restaurants. Some of our favorite spots include:

You’ll also find many great bars along 5th Avenue and around Flatbush Avenue. Our favorites include: 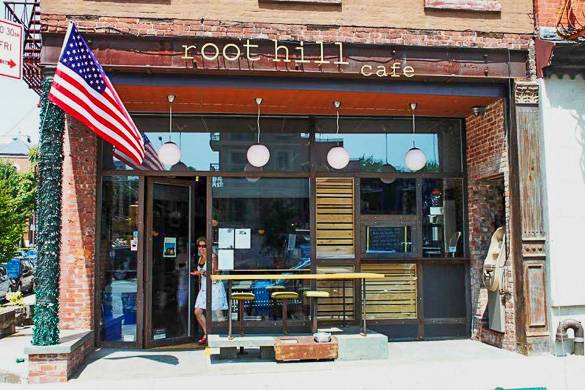 After a late night partying, pay a visit to one of Park Slope’s great coffee shops in the morning. They will all make sure you’re quickly fit and ready for another day of exploring Park Slope again. Some of our favorites are:

Stay in Your Own Park Slope Apartment 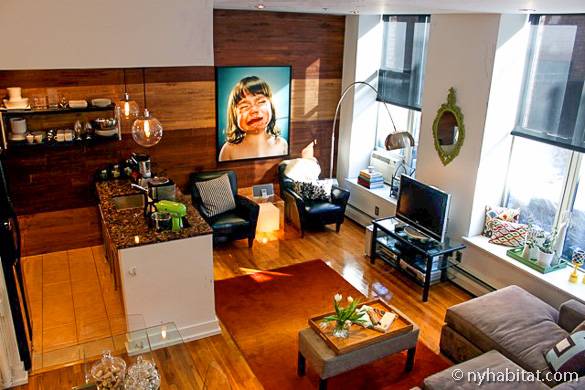 One of our modern Park Slope, Brooklyn apartments
If you’re thinking about going on holiday to New York City, Park Slope can be your perfect base to explore the city from. The neighborhood has a real family vibe, so you can bring your whole family to enjoy a New York holiday.

Have a look at our vacation rentals in Park Slope to get an idea of our accommodation in bustling Brooklyn! We have multiple 3-bedroom and 4-bedroom apartments in Park Slope, which can be a real money-saver for your family when you compare the prices to staying in a Manhattan hotel!

You won’t have to worry about finding the time to explore Manhattan if you’re staying in Park Slope; because the neighborhood has many subway stations where you can catch a train directly to Manhattan. For example, if you catch a 2 or 3 train from Atlantic Avenue, you’ll be taken to Wall Street, Manhattan in just 5 stops!

If you’re planning to stay in New York City for a longer time, then we also have fully furnished long-term apartments in Park Slope available. You can truly live like a local in Park Slope, and will have even more time to explore this fantastic neighborhood!

If you’re a student or intern looking for accommodation in New York, we also have a great affordable option for you: rooms for rent in Park Slope. These rooms are often located in beautiful brownstones, and a lot bigger than what you would get in Manhattan. Park Slope is a very safe neighborhood, so your parents can feel at ease knowing you’re staying in a nice area! The great NYC subway system will also ensure you can easily commute to school or work in Manhattan or anywhere else in the city.

What to See and Do in Park Slope

If we still haven’t convinced you of the fabulousness of Park Slope, then have a look at all these things you can see and do in the area.

For starters, Park Slope is a very green neighborhood. When you walk through the tree-lined streets among the brownstones, you’ll understand why Park Slope is often considered to be one of the prettiest neighborhoods in the city. 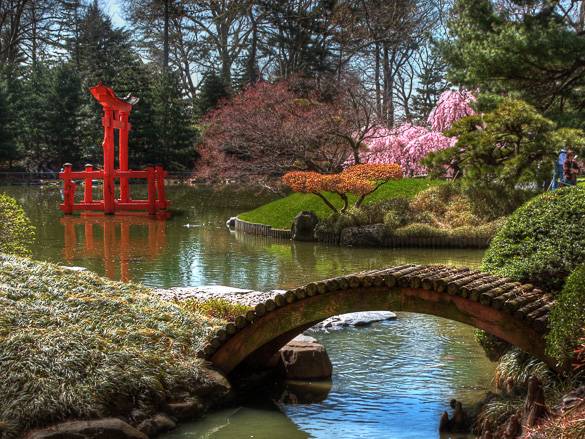 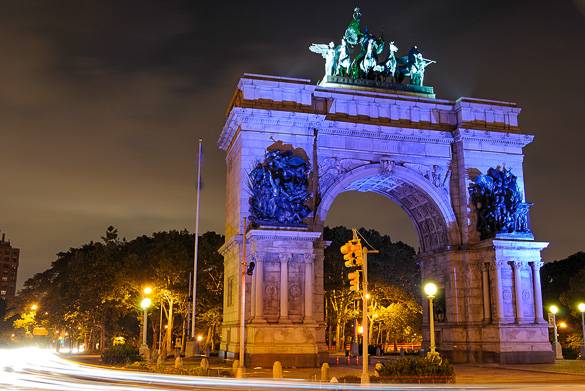 Grand Army Plaza marks the entrance to Brooklyn’s Prospect Park
Next to Prospect Park, there are also several smaller parks to be found in the neighborhood. In the western part of Park Slope, you’ll find Washington Park. The monumental Old Stone House lies in the center of the park, and a farmer’s market is held here every Sunday. The Old Stone House is a reconstructed Dutch farmer’s house, and played a part in the American Revolutionary War! You can find another great farmer’s market at Grand Army Plaza, which is the northern entrance to Prospect Park.

When the weather isn’t playing along, pay a visit to the Brooklyn Museum, which has art from all over the world and is actually the second-largest art collection in New York City. Alternatively, a visit to the Brooklyn Public Library can also make for a great cultural afternoon. And if you’re looking for a bit more of a thrill, go see a Brooklyn Nets game in the great indoor arena the Barclays Center! 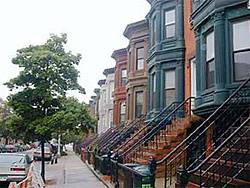 Park Slope is one of the best-known and most popular neighborhoods in Brooklyn. Park Slope is located southeast of downtown Manhattan and is often accessed…

END_OF_DOCUMENT_TOKEN_TO_BE_REPLACED 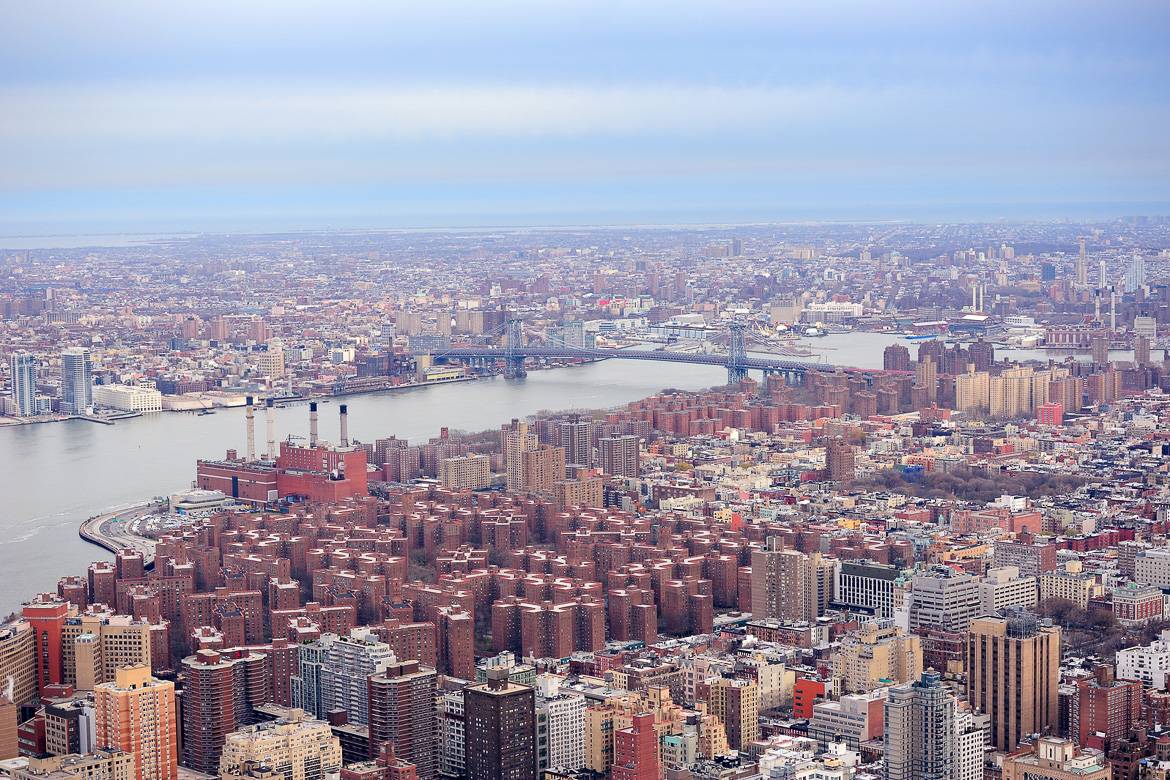 Live Like a Local in Williamsburg, Brooklyn, New York

Brooklyn has always marched to the beat of its own drum. With its rich array of cultural enclaves, artistic and architectural triumphs, and outdoor attractions,…

END_OF_DOCUMENT_TOKEN_TO_BE_REPLACED 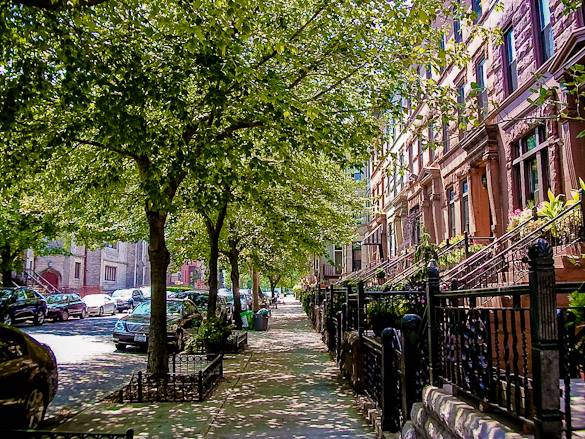 Live Like a Local in Bedford-Stuyvesant, Brooklyn, New York

Whether it be for a holiday or a place to live, New York City has always been a very attractive destination. People traveling to the…

END_OF_DOCUMENT_TOKEN_TO_BE_REPLACED 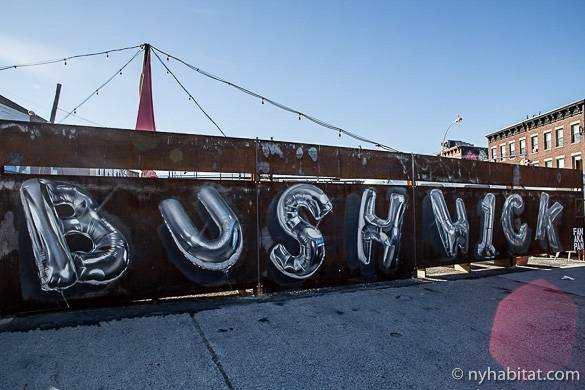 Live Like a Local in Bushwick, Brooklyn, New York

Like many of Brooklyn’s once-undesirable neighborhoods, Bushwick is emerging as one of the hottest new areas for young people to live in New York City….

END_OF_DOCUMENT_TOKEN_TO_BE_REPLACED

Live Like a Local in Crown Heights, Brooklyn, New York

Crown Heights, located in central Brooklyn and home to many of the NYC borough’s museums, is known for its cultural diversity. Surrounding the neighborhood are…

END_OF_DOCUMENT_TOKEN_TO_BE_REPLACED

One Response to “Live Like a Local in Park Slope, Brooklyn, New York”