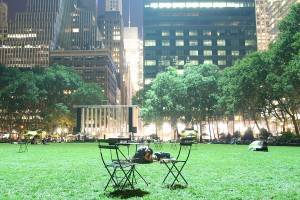 Warm weather, as regular readers of New York Habitat may already be aware, is when New Yorkers like to do everything al fresco, whether it’s enjoying a fine dinner or listening to a concert. So why shouldn’t moviegoing be part of the open-air fun?

Long an established tradition in midtown, with the beloved Bryant Park festival (see below), outdoor movies are now more popular than ever in New York City, with new series seeming to crop up every summer. It’s understandable, because when the weather co-operates, seeing a movie outside, on the big screen, and for free, is among the high points of urban existence. The following are some of the best-known outdoor film series in the city – give one a try and see if you aren’t convinced.

The HBO Bryant Park Summer Film Festival runs every Monday night from June through August at Bryant Park. The park is located on 6th Avenue and West 42nd Street in Midtown West, a part of town that offers plenty of cozy accomodations. Offerings in 2011 include such iconic turns as Paul Newman in Cool Hand Luke and Marilyn Monroe in Gentlemen Prefer Blondes. The lawn opens to picnickers at 5:00 and the films begin at sunset—typically, some time after 8:00. (But try to arrive early—as close to 5:00 as possible—because Bryant Park does get crowded on movie nights, and lines for the bathroom can get correspondingly long as well.)

Since summer is naturally the best time to get close to the water, we’re happy to report that the mighty Hudson River provides a backdrop for several of New York’s outdoor movie series. The Hudson River Park’s River Flicks for Kids series unwinds at Pier 46, on Charles Street and the river (Greenwich Village – West Village), Friday nights at 8:00 and offers chances to revisit recent hits like Toy Story 3 and How to Train Your Dragon in all their big-screen glory.

If you’re traveling sans kids, River Flicks for Grown-Ups takes place on the Pier 63 lawn (between 22nd and 24th Streets, along the Hudson) Wednesday nights at 8:00. This year’s Grown-Ups series features some of the most popular films from 2010, meaning you can catch up with flicks like The Social Network and The Town in case you missed them the first time around.

Further uptown in the Upper West Side, the Summer on the Hudson series runs each Wednesday night in July and August at Pier 1 in Riverside Park South (West 70th Street and the Hudson River). Seating is open at 7:00 and the movies begin at approximately 8:30. This year’s theme is Terror Through the Decades, so you may want to bring someone to snuggle with as classic chillers like Hitchcock’s The Birds and the original Invasion of the Body Snatchers unfold above you.

Feel like investigating one of these series with your own eyes? New York Habitat has apartment rentals available all summer long, from one end of Manhattan to the other.

– This one-bedroom furnished loft apartment (NY-8901) is located on the third floor of a walk-up national historic landmark prewar building in downtown’s Tribeca neighborhood. The apartment has high ceilings and the walls are adorned with exceptionally high-quality artwork. The living room is equipped with a lofted queen-sized bed while the bedroom includes both a queen-size futon and a queen-size lofted bed.

– Uptown, another one-bedroom apartment in Midtown west (NY-12268) boasts hardwood floors, a fully equipped kitchen, and a small terrace facing south (which means you’ll get plenty of sun). The apartment’s central location at 8th Avenue and West 49th Street means Times Square and the theater district are both a short walk away, and every major subway line is easily accessible as well.

– A furnished studio rental (NY-10919) on 1st Avenue and East 13th Street puts you right in the heart of the East Village, home to some of the New York’s liveliest nightlife as well as scores of restaurants. A fully equipped kitchen and close proximity to both the L train and Union Square are just some of the additional amenities you’ll appreciate here.

Do you have a New York outdoor movie experience you’d like to share with New York Habitat readers? Feel free to recommend, or just plain reminisce, in the space provided below. 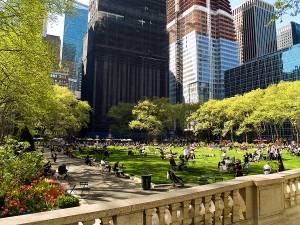 Movies in the Park

Paris and New York City mirror themselves in many ways. Both are international capitals of the arts and style and the two city’s enjoy millions…

END_OF_DOCUMENT_TOKEN_TO_BE_REPLACED 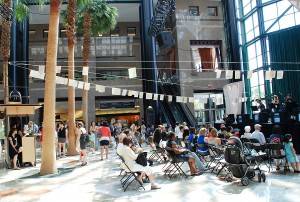 With summer finally (or almost) here, it’s time to get excited about one of New York City’s essential warm-weather rituals—the free outdoor concert, a tradition…

END_OF_DOCUMENT_TOKEN_TO_BE_REPLACED 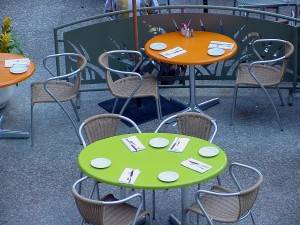 Spring has sprung and New York Habitat is ready to unveil its number one pick for Best Springtime Activity in New York City. There are…

END_OF_DOCUMENT_TOKEN_TO_BE_REPLACED

Paris in the Movies – Indulge Your Inner Film Buff

Sometimes there’s nothing like watching a movie to rejuvenate or even spark interest in a certain area or place. If Paris isn’t already on your…

END_OF_DOCUMENT_TOKEN_TO_BE_REPLACED 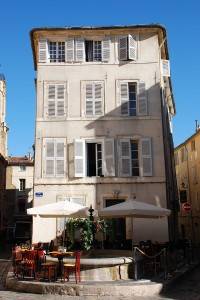 The cosmopolitan town of Aix-en-Provence is worth a stay under any circumstances, but if you’re a fan of cinema, then you definitely want to stop…

END_OF_DOCUMENT_TOKEN_TO_BE_REPLACED

One Response to “Hot Fun in the Summertime, Part II: Outdoor Movies!”