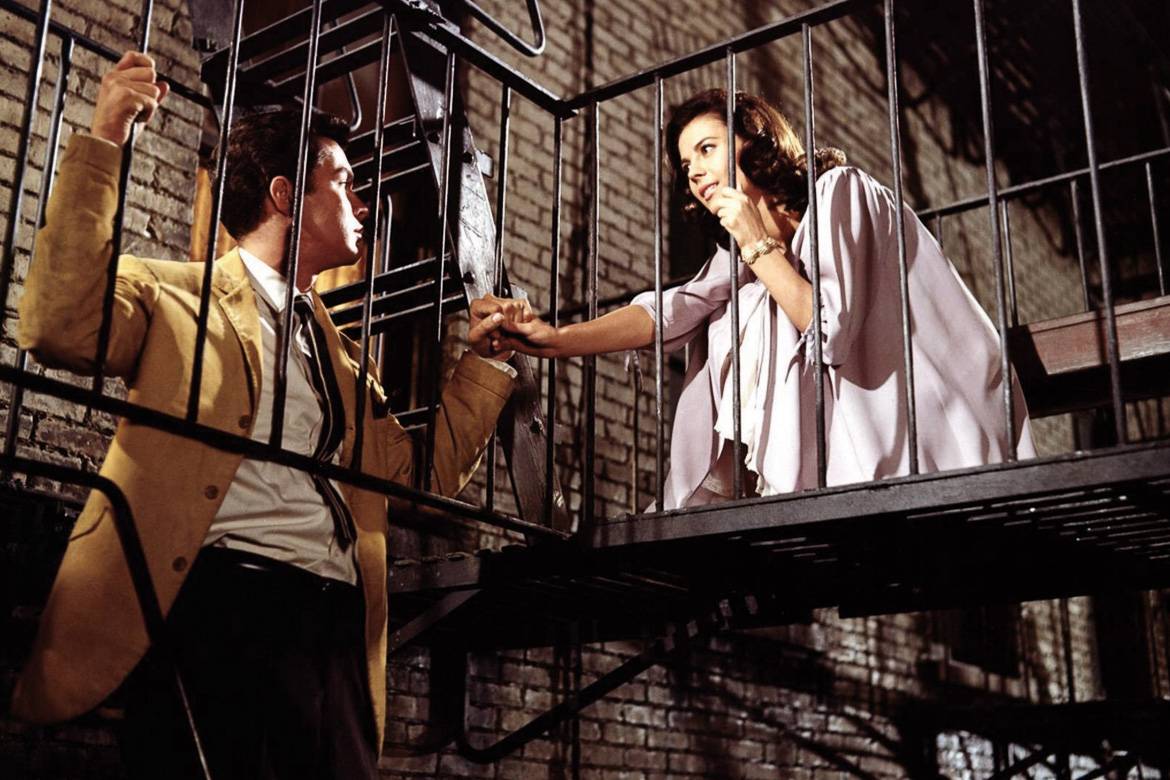 One of the most memorable appearances of an NYC fire escape was in West Side Story.

The movie West Side Story is a riff on Romeo and Juliet set in the Lincoln Square neighborhood of New York’s Upper West Side in the 1950s, so it fits that the star-crossed lovers court each other not from a balcony, but a New York fire escape. How often these ubiquitous metal structures are climbed for a late-night rendezvous is anyone’s guess, but inventive New Yorkers have used them countless ways since the Tenement House Act first required them in 1867. For some perspective on how essential NYC fire escapes have become, a later 1887 amendment to the same law finally mandated indoor toilets!

In that distant time before air conditioning, fire escapes could be a welcome, if sometimes dangerous, place to sleep outside. In the winter, New Yorkers also kept iceboxes on their fire escapes. These days, fire escapes remain a popular place for residents without a backyard to barbecue on small grills or sit down with a good book and get a summer tan. Others transform them with colorful potted gardens filled with flowers and herbs. However, most alternative uses like barbecuing and gardening are actually illegal. With so many possible adaptations, it’s easy to take fire escapes for granted or forget their original purpose: a means to escape a fire!

Large fires are rare in this well-regulated city of millions, but if you’re a new tenant in a New York building with an outdoor fire escape, there is some important basic information you’ll want to know.

1. The basic legal requirements of the City of New York 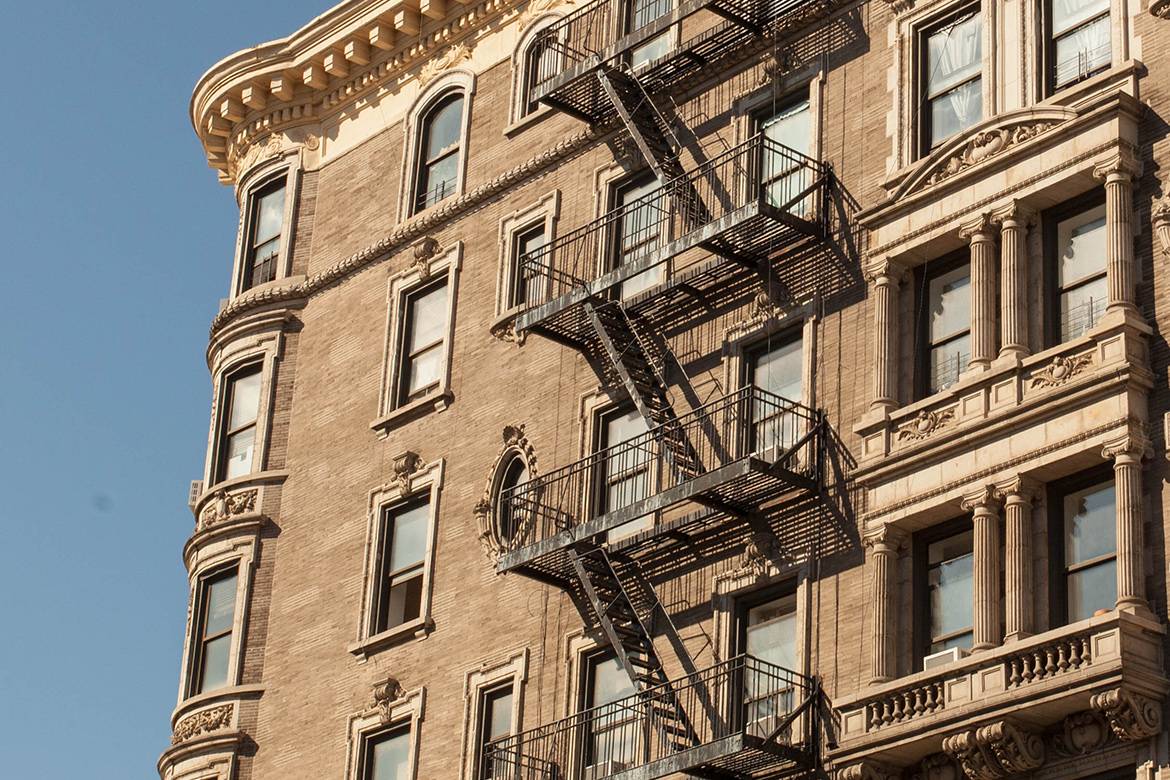 Requirements for exterior fire escapes ceased after the 1968 Building Code. New York law at the time of their requirement stated that there must be direct access to an outdoor fire escape from any apartment above the ground floor. Since this access is almost always through a window, you will want to make sure that the window opens quickly and easily. Insect screens are allowed, but only if they slide open vertically or horizontally. If the exit window is covered by metal bars or a security gate, the device must be approved by the Fire Department of the City of New York (FDNY), which requires bars to be releasable from the inside without a key. 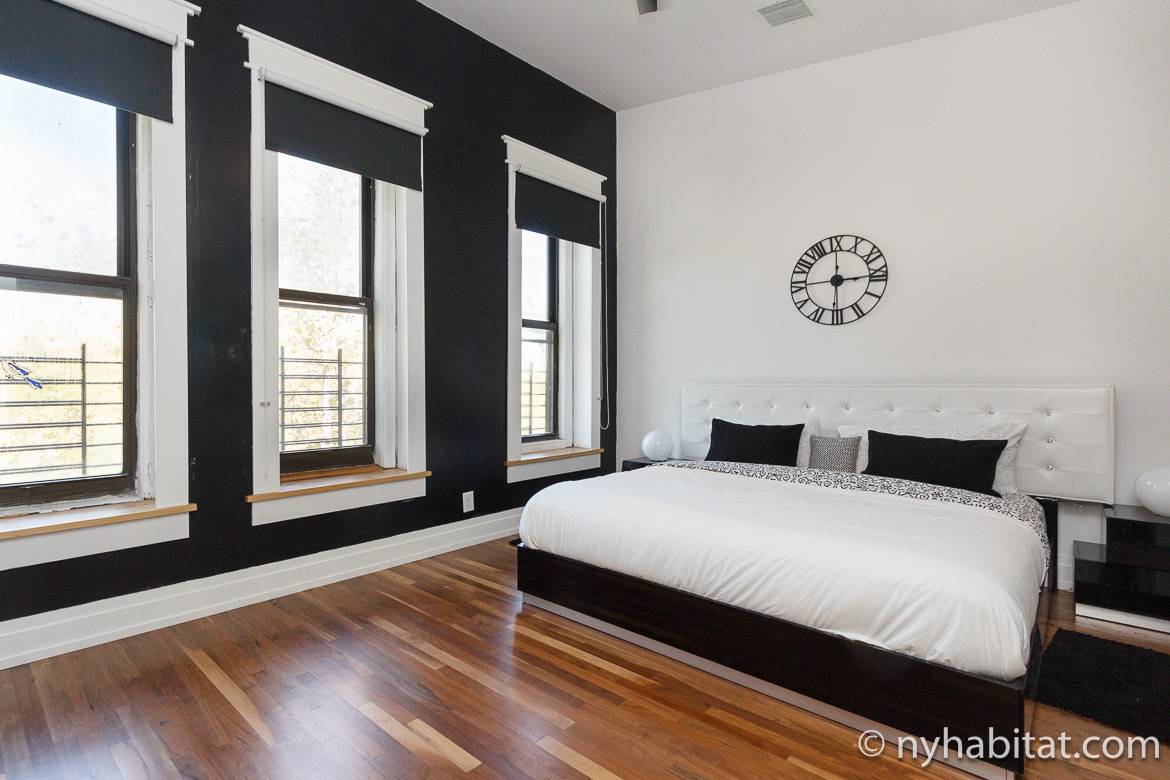 If you live in a building with three or more units and a child ten years old or younger lives with you, your landlord is required to install child safety window guards to keep little ones from falling, even on the ground floor. You can see an example of window guards in one of our four-bedroom apartments in Harlem. Window guards are difficult to remove when installed correctly, therefore they can’t be placed in the fire escape window. It’s even against the law to put anything in front of a fire escape window, so it’s a sure bet that untold numbers of the city’s residents are guilty of at least one crime. If your escape window is in the kitchen, be sure not to put your refrigerator in front of it. 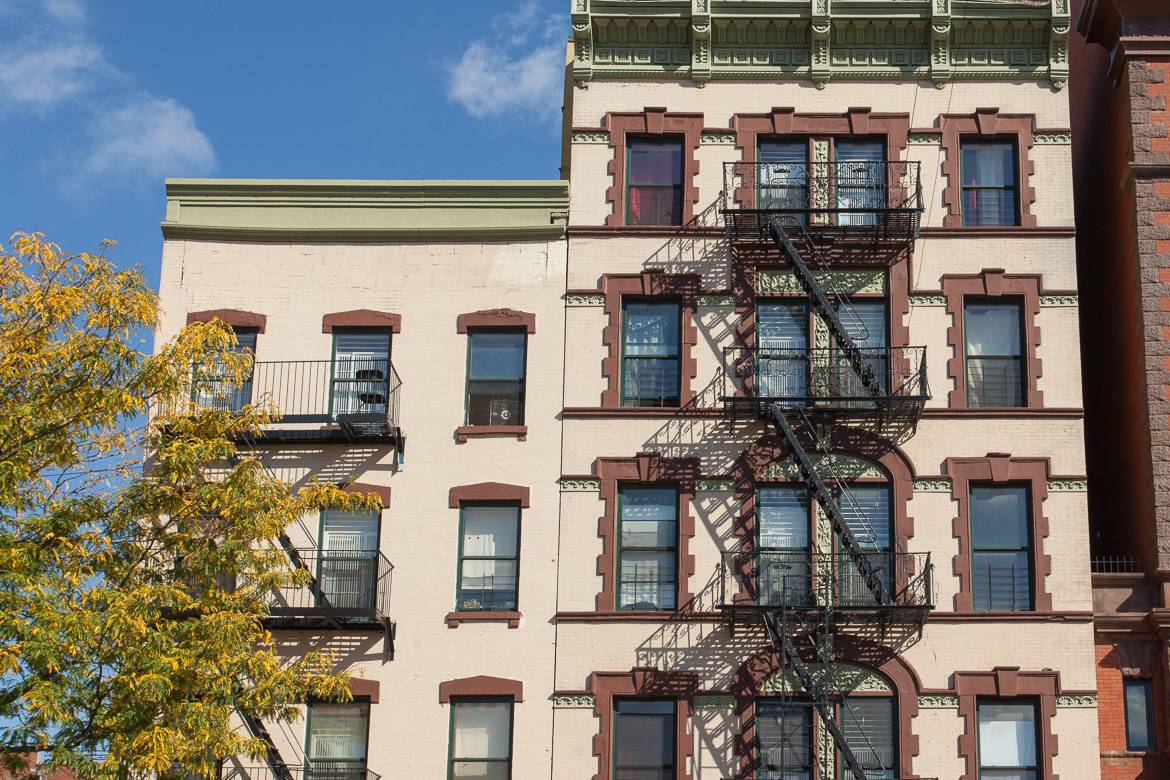 Relaxing on your fire escape isn’t illegal, but be sure to keep it free of furniture.

It’s not illegal to stand or sit on your fire escape, hence their popularity as a social space during summer parties. Do be advised that partying on your fire escape is highly discouraged by the FDNY and other authorities, as accidents can happen. 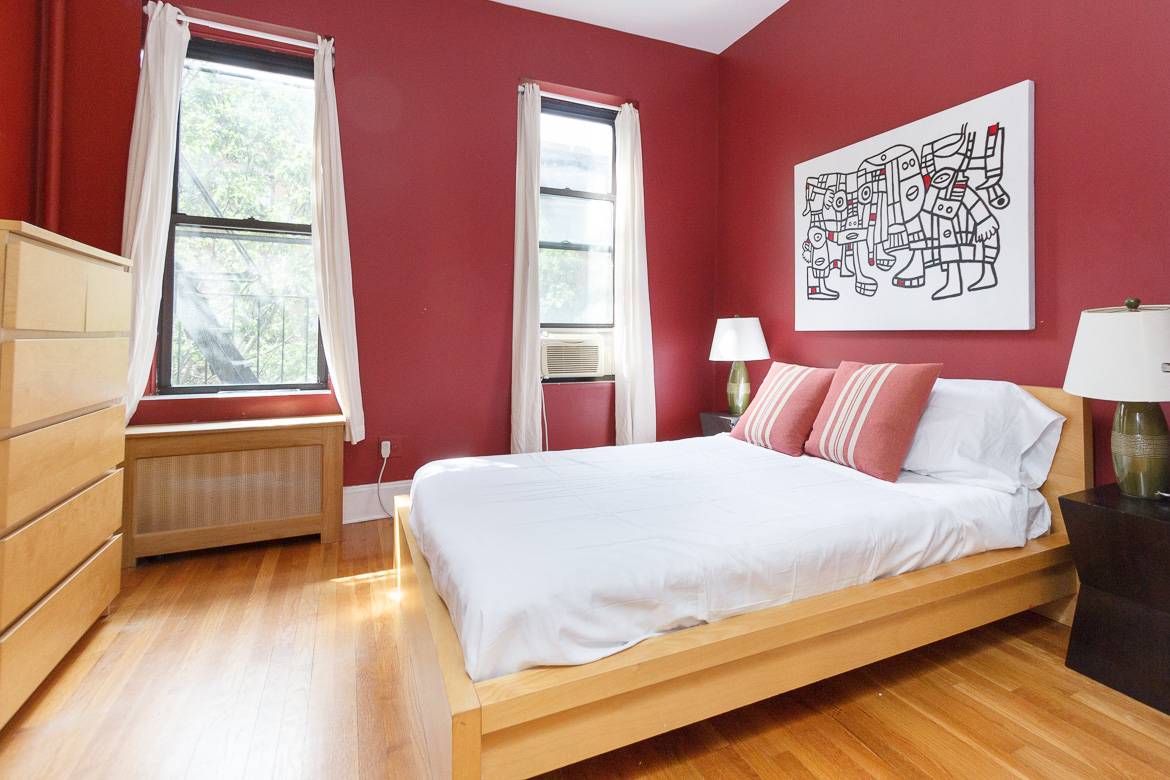 This air conditioner is placed so as not to block the fire escape.

Many people may not know that it’s illegal, by penalty of a misdemeanor charge, to store anything on a New York City fire escape. But since space is a hot commodity in many New York apartments, you might see people illegally storing bicycles on their fire escapes. It is also illegal to cover the platform outside your access window. For instance, you can’t surround it with wire mesh to give pet cats a safe place to sit. It’s safe to say that most New Yorkers will overlook a potted plant here and there or small decorations, but essentially, any large obstruction on a fire escape can put you and your loved ones at risk. Air conditioners can also illegally obstruct fire escapes, but not the one pictured above in our two-bedroom furnished rental on the Upper West Side. If you see anything on a fire escape that concerns you, it’s okay to politely ask your neighbor to remove it.

3. What color is your fire escape? 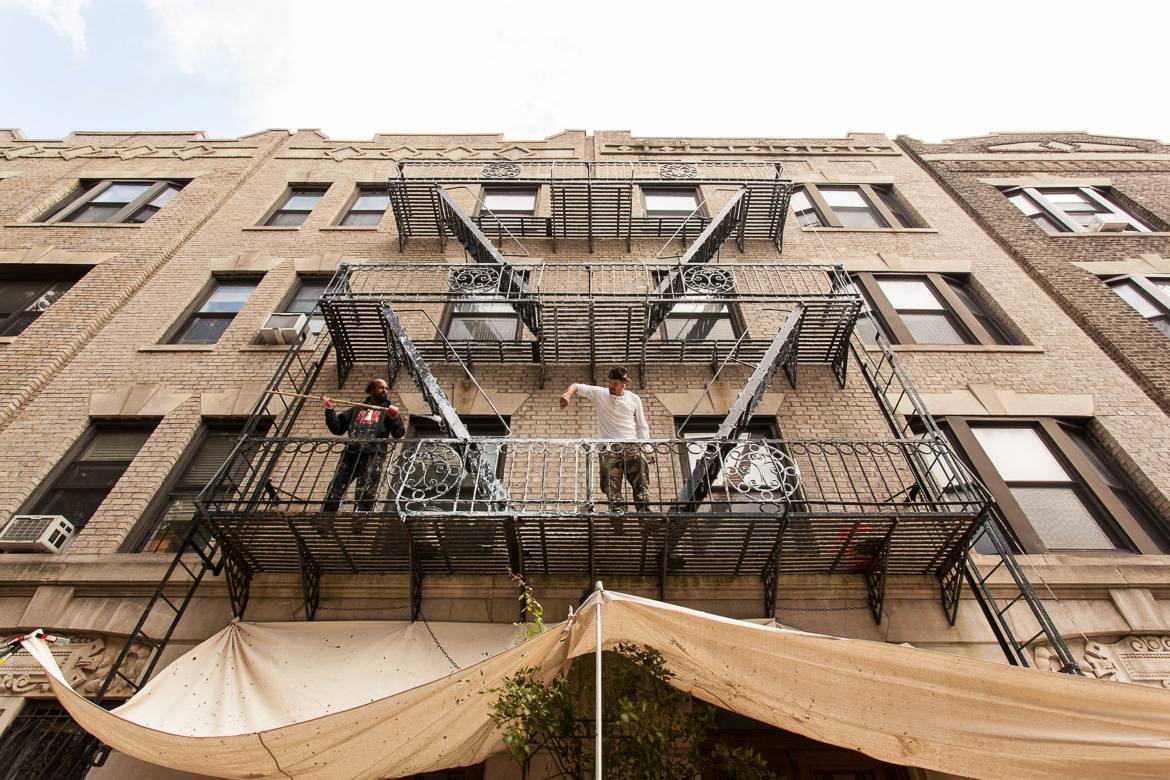 While black is the most common color, NYC fire escapes often add a pop of color to buildings’ exteriors.

Neighborhoods like SoHo, Greenwich Village, the East Village, and the Lower East Side were developed in the late 19th and early 20th centuries when fire escapes first became ubiquitous in New York. Walk through these neighborhoods and you will see fire escapes in every color of the rainbow.

This practice goes back to a 1929 law that required fire escapes made of rust-prone materials to be covered with “two or more coats of good paint in contrasting colors.” One coat was applied before installation, and the other once the fire escape was attached. The purpose of the contrasting colors was to make it easier for owners and inspectors to tell when it was time to get out the paintbrushes. Landlords still have to keep their fire escapes rust-free and painted with at least two good coats of paint, but the often-dazzling colors have become a sure sign of that legendary New York flair. 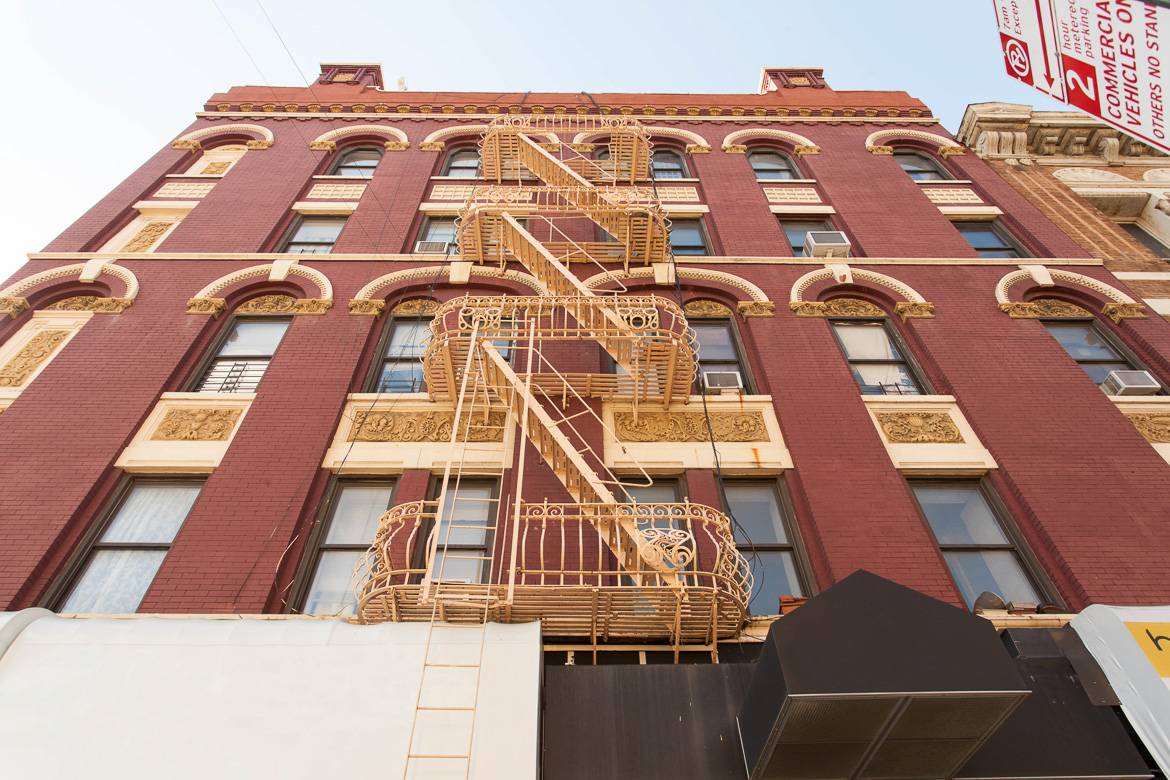 This fire escape's cream design adds a unique element to this red-brick building.

A sturdy and exquisitely painted fire escape isn’t very helpful if you’re trying to get down and the ladder doesn’t work. Sixteen feet, the maximum distance allowed from the lowest fire escape balcony to the ground, is a long way to jump. Your ladder might be fixed in place or swing down from a hinge, but it’s likely to be the kind that descends vertically through guides from the lowest platform to a safe landing spot. No drop ladder is required where the distance from the lowest platform to a safe landing is five feet or less, though that’s still without a doubt a daunting leap for some! Once you’ve found your furnished apartment or vacation rental, it’s good practice to climb down the fire escape and make sure that the drop ladder is working and can be easily released and extended to the ground.

Drop ladders were designed to be retracted to prevent unwanted entry to the building by burglars. If the ladder is always extended to the ground, either through inattention or malfunction, notify your landlord. It’s not illegal for the ladder to remain extended, but discuss it with your landlord if it’s a security concern for you. If there is no ladder in sight, you should definitely notify the landlord.

5. Is your fire escape safe? 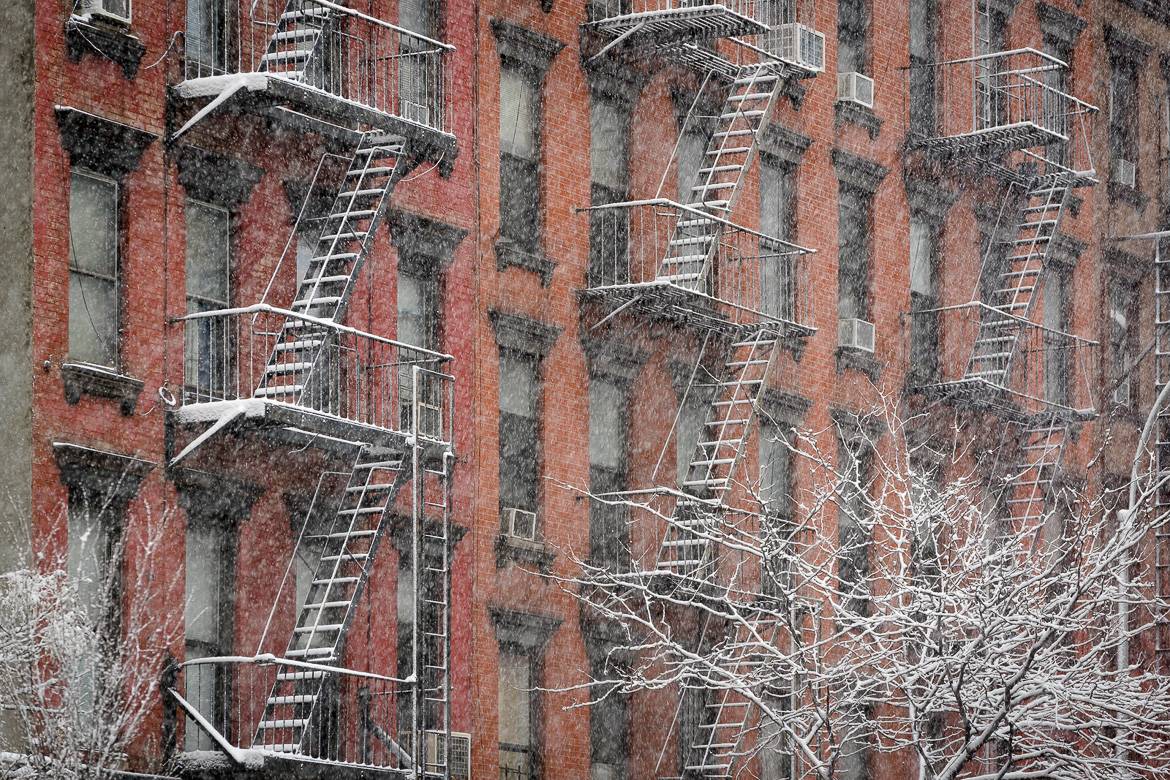 Fire escapes should be maintained to be useful at all times of the year and kept clear of snow and leaves.

New York Habitat conducts its own inspections and only lists apartments with legal and well-maintained fire escapes, but don’t hesitate to take a close look at the general condition of your fire escape. Many are impressively ornate objets d’art on landmarked buildings, such as the one on the Puck Building in SoHo. They also adorn scores of five and six-story buildings in some of the most picturesque parts of the city, such as the Brooklyn neighborhoods of Park Slope, Carroll Gardens, and Brooklyn Heights.

Although good maintenance and decent paint are mandatory, most fire escapes were built before World War II (pre-war), and more than a few were installed on much older buildings. If the structure seems rickety, or if there are weak and/or broken steps, it’s not in compliance with the law. The general rule is that nothing should touch a fire escape but your feet, so fire escapes should be kept clear even of natural debris. The open grating of fire escape platforms and stairs are intended to prevent the buildup of snow or ice in the winter and pileups of leaves in the fall. It’s also the law that snow and ice be removed to maintain a safe fire escape. 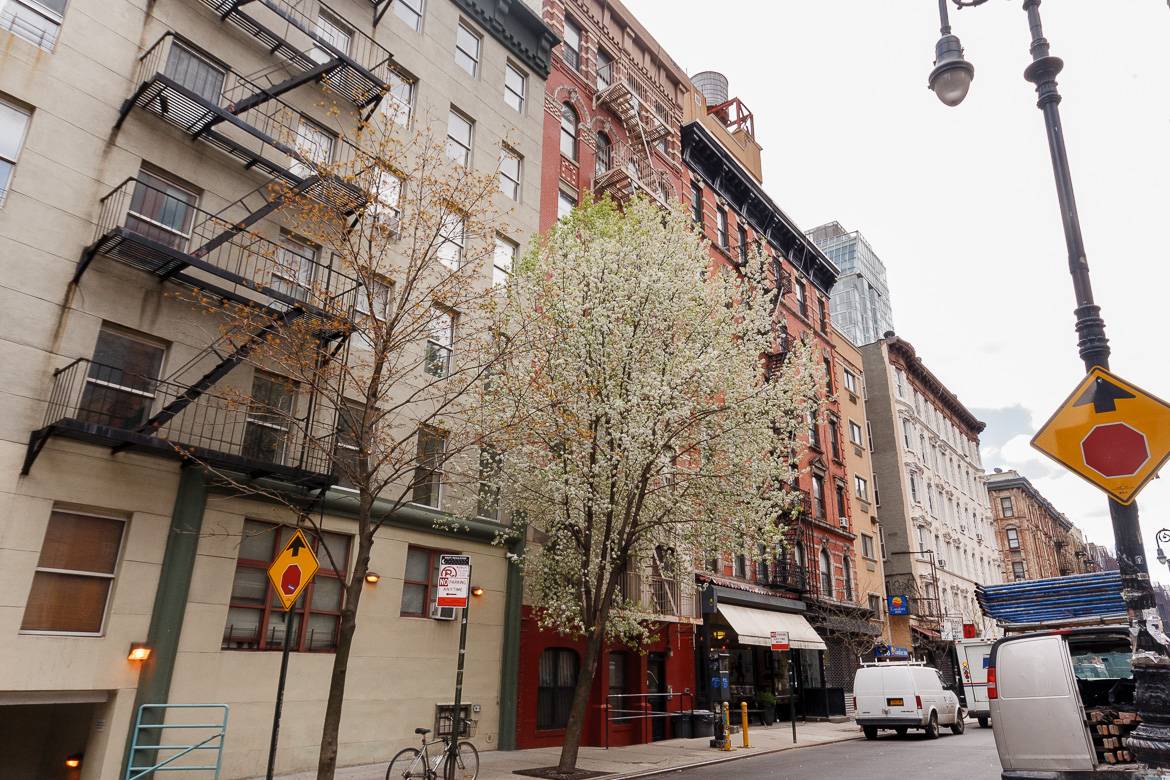 Our furnished Lower East Side apartment shows that fire escapes are essential to NYC architecture.

Fire escapes may be disappearing in the rapidly renovating parts of New York, but they will always remain an iconic symbol of the city’s urban scene. Where they continue to exist, like outside our one-bedroom apartment on the Lower East Side, you can count on them as your best bet for a swift exit. One last thing: Don’t forget to test your smoke alarm. It only takes a minute!

Apartment Renting Tips Video: Can I rent an apartment without seeing it first?

Welcome to another New York Habitat Apartment Renting Tips Video, where we answer frequently asked questions from our clients. Today’s question: “Can I rent an…

END_OF_DOCUMENT_TOKEN_TO_BE_REPLACED 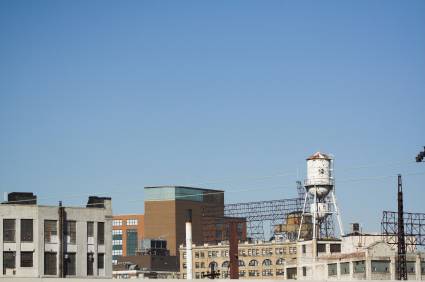 We’ve talked about New York’s renaissance dozens of times before on this blog; but we’re mostly talking about the dramatic changes in the city since…

END_OF_DOCUMENT_TOKEN_TO_BE_REPLACED 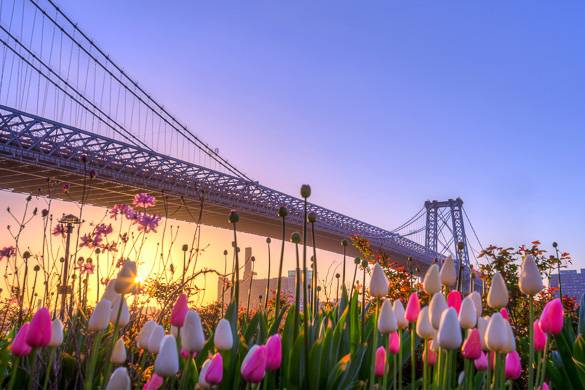 The Best Ways to Enjoy Spring When Renting an Apartment in NYC!

After what seemed like an endless winter, spring is finally “springing” up all over New York City and that buzzing energy of the city that…

END_OF_DOCUMENT_TOKEN_TO_BE_REPLACED 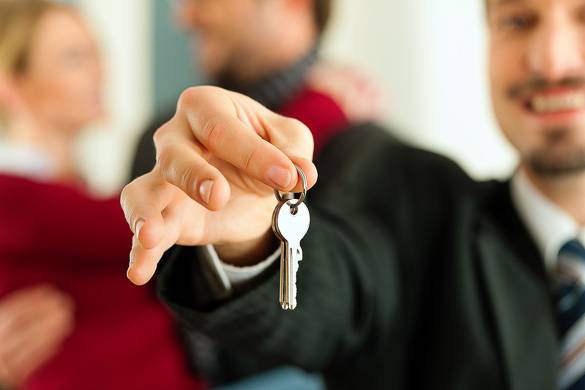 10 Things to Avoid When Renting an Apartment Online

Renting an apartment online has become easier and easier over time. Different real estate agencies and companies are offering a database of apartments for rent…

END_OF_DOCUMENT_TOKEN_TO_BE_REPLACED 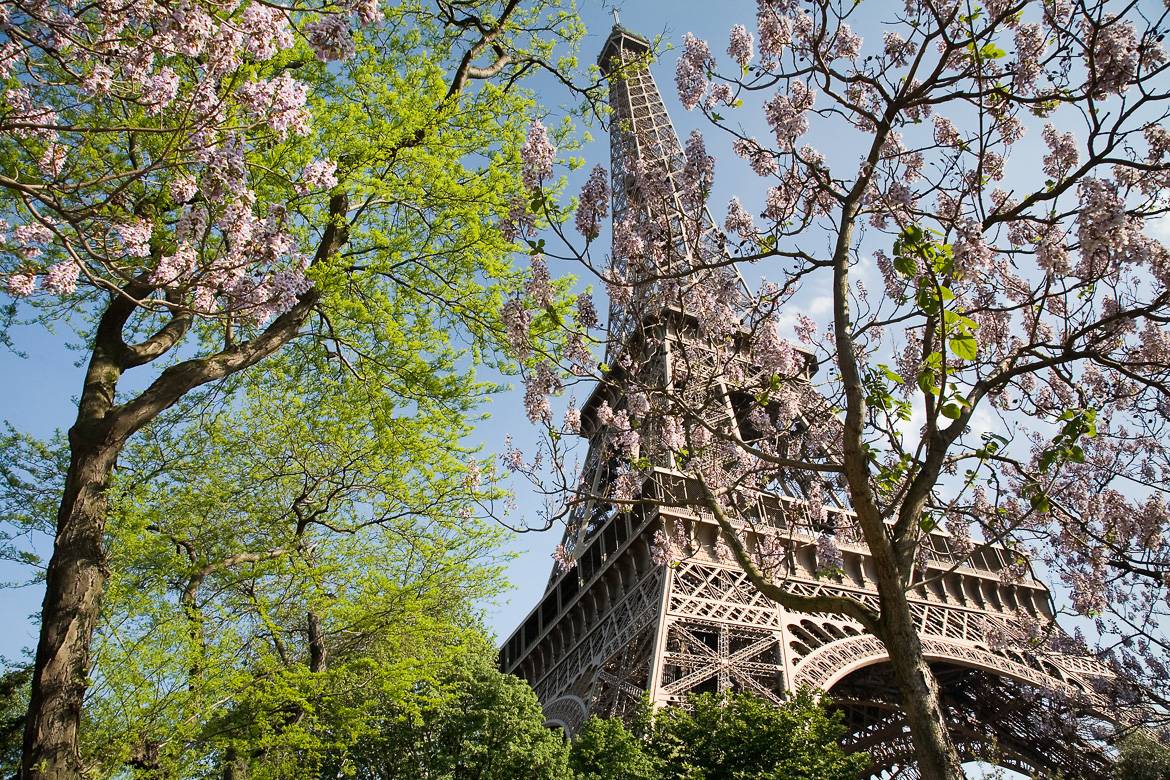 What to See, Hear, and Do While Renting an Apartment in Paris This Spring

It’s springtime in Paris! The spring season is the best time of year to visit this glamorous city and take advantage of perfect temperatures, lower…